7 Killed, 150 Injured in Delhi Ahead of Trump’s Visit

At least Seven people were killed and more than 150 were injured in the Indian capital New Delhi during protests between two groups over the Citizenship Amendment Act (CAA), on Monday.

Thousands of people demonstrating against a new citizenship law, the clashes have turned more violent several hours before as US President Donald Trump visits Delhi. Indian Prime Minister Narendra Modi and Trump are set to meet for talks today at a venue located a few miles away from where the clashes occurred.

On Tuesday, schools remaining shut in some areas of the city, amid news reports of fresh clashes. At least five metro stations in the city were closed.

Hundreds of people supporting CAA clashed with those who opposed it. The two groups have been fighting since Sunday. Protesters set fire to several vehicles, destroyed metal barricades as supporters of the new law clashed with opponents. 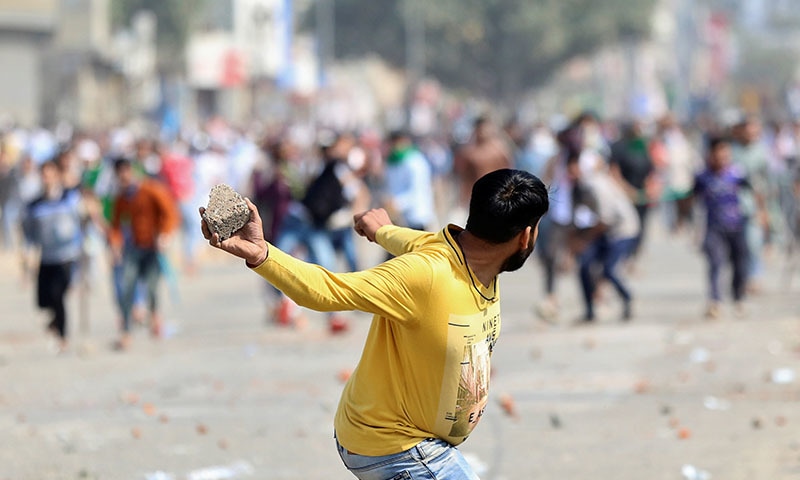 The additional medical superintendent at the Guru Teg Bahadur Hospital, Dr. Rajesh Kalra said “some of the people brought in had gunshot wounds.”

Police used tear gas and smoke grenades but struggled to disperse the crowds, as both sides hurled stones and turned a wide boulevard into a rock-strewn battle zone, one police constable was killed, a police official told Reuters, declining to be named since he wasn’t authorized to speak to media.

A video circulates on social media shows a group of people lying injured on the ground, some of them singing the Indian national anthem. Indian security forces record them and beat the wounded.

A Reuters witness saw at least one Muslim man and a burqa-clad woman beaten by dozens of pro-law protesters with sticks and iron rods.

“The death of the police head constable is very tragic. He was also one of us. Please renounce violence. Nobody benefits from this. All problems will be solved by peace,” Delhi’s Chief Minister Arvind Kejriwal tweeted.

US President Donald Trump and First Lady of the United States, Melania Trump arrived earlier at the Sardar Vallabhai Airport in India for a two-day visit. The two sides are likely to sign a billion-dollar trade deal in military equipment and missile defense systems.

Kashmiris Voice: ‘We will Die Like Cattle’ Amid Coronavirus Outbreak

Dr Mubashar Hassan an Icon of Socialism and Struggle

SBP Asks Banks to Pull off Charges on Online Transactions

The Exports of Pharmaceutical Good Enhance in Last Eight Months