Gigi Hadid Turns her Office into a Playroom for Daughter Khai

In a series of never-before-seen images of her pregnancy, Gigi Hadid mesmerized fans as she gave them a sneak peek into her newborn’s playroom.

To draw applause from her admirers, the new mom posted some unseen images of her birth.

The super model transformed part of her office into a playground for her and Khai, the daughter of Zayn Malik. 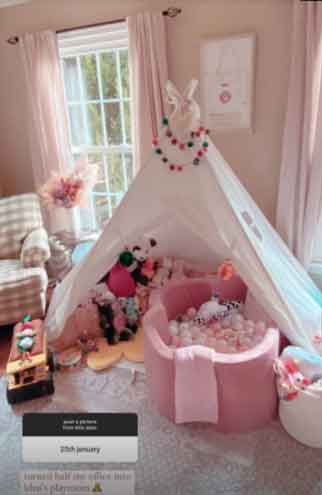 One of the pictures reveals that the 25-year-old model has converted her four-month-old baby girl’s section of her office into a play area, featuring a tent packed with stuffed animals and toys to the brim.

To delight her admirers, Zayn Malik’s sweetheart also posted some unseen images from her pregnancy. The post gathered enormous likes from its followers. However, Gigi Hadid has yet to share a picture of the face of her baby daughter.

Due to ICC WTC’s Final, Asia Cup would Not be Possible: Ehsan Mani

Balochistan Awami Party will Emerge as a King Maker in Senate

Without Kashmir Issue There would be No Talks with India: Sheikh Rasheed

Pakistan is Disappointed over US State Department’s ‘Inconsistent’ Tweet on Kashmir: MOFA

Due to ICC WTC’s Final, Asia Cup would Not be Possible: Ehsan Mani