As per Whatsapp leaked conversation, Arnab Goswami’s knows about Balakot Air Strikes even before it were carried out.

According to a reported leaked chat of WhatsApp the Indian anchor person Arnab Goswami has sent a message to Parthi Dasgupta, former CEO of Broadcast Audience Research Council (BARC) who is an accused in the TRP scandal case.

Arnab Goswami on 23 February 2019, told Dasgupta that “Something big will happen” When Dasgupta asked if it was something about “Dawood” Arnab replied, “No sir Pakistan. Something major will be done this time”.

When Dasgupta further enquired if it was about “strike or bigger” Goswami replied “Bigger than a normal strike. And also on the same time something major on Kashmir. On Pakistan the government is confident of striking in a way that people will be elated. Exact words used.”

Arnab Goswami claiming that they have “won like crazy” after the Pulwama Terror Attack that killed 40 soldiers of the Indian Army.

According the media reports Mumbai Police have mentioned the relationship in a supplementary chargesheet filed during an probe into a ratings tampering scandal involving a few news channels in India, including the Indian hyper-nationalist Republic TV.

The Mumbai police have retrieved conversations that are more than 1,000 pages from Dasgupta’s phone, During the conversation, the BARC CEO was seen asking Arnab Goswami to reach out to the government on his behalf at multiple times.

In a WhatsApp conversation on April 4, 2019, just days before the general elections, Dasgupta had asked Arnab Goswami to stall India’s Telecom Regulatory Authority’s (TRAI) proposal to make the BARC’s viewing data public rather than the council just supplying it to channels.

Dasgupta had told Goswami that if the data was made public then multiple channels could be blacked out by Multi System Operators (MSOs) and Local Cable Operators (LCOs), “With public data, MSOs and LCOs will push you guys for more carriage,” Dasgupta told Goswami. 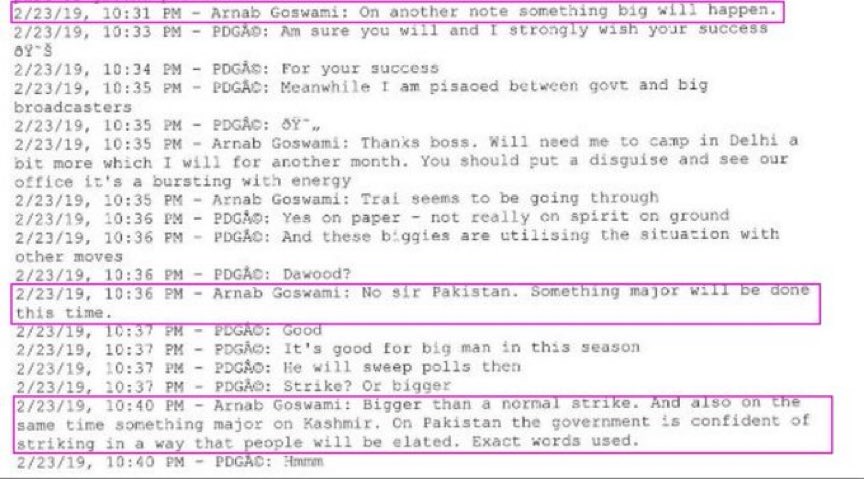 During the Third Attempt, a SpaceX Rocket Explodes on Arrival

‘It’s Between you,’ WhatsApp Tells Users that their Conversations are Completely Private

Fans to Get Refund of PSL Tickets from Today

Senate Elections: PPP Expecting to Win 09 Seats from Sindh as Opposition in Disarray

Balochistan Awami Party will Emerge as a King Maker in Senate

Economic & Political Activities in IoK Must Revive Now: US

Without Kashmir Issue There would be No Talks with India: Sheikh Rasheed

Fans to Get Refund of PSL Tickets from Today

Hat-Trick, Six 6’s in an Over All Happened in WI vs SL Match

OGDCL Cuts Prices of LPG by Rs.22 Per Kilo