BREAKING NEWS
Home Entertainment Taylor Swift Sent $3,000 to Her Fan to Pay for The Green Card

Taylor Swift Sent $3,000 to Her Fan to Pay for The Green Card

Kind-hearted American pop star, Taylor Swift sent $3,000 to her fan to pay for the green card who facing deportation after she lost her job due to coronavirus pandemic

Taylor Swift saw a Tumblr post from Skylar Kervin who detailed how she was just days away from being deported back to Canada because she could not afford a new green card.

The Canadian, now living in Alabama, talked about her recent online difficulties and caught the eye of swift.

Skylar has resided in the United States with her husband for five years now, was reported to have said: “I was facing deportation as my green card renewal was coming up and due to COVID-19, I lost my job. I was stressing about how I was going to afford to renew it. I had until Wednesday of next week to get my paperwork sent off. My last day in the US was scheduled for June 22nd.”

“I would have been deported had Taylor’s generosity not come through, I’m using the money to renew my green card and if there is any remaining afterward I will be using it for a flight home to visit my family who I haven’t seen in over 3 years due to financial struggles.”

Just one day before she received her payment, Skylar opened up about the rush to remain in the United States.
She wrote on Tumblr Wednesday: “At the beginning of March I lost my serving job due to the closing of dine-in service in my state. I’ll have to renew my green card within the next 2 weeks and I have no idea how I’m now going to afford an extra $680 when I can barely afford to eat and pay my bills. Every tear, dollar, piece of paperwork, mile drove to appointments, etc. is about to go out the window if they deport me due to the government’s strict timelines with things like this.”

In addition to a link to her PayPal account, Skylar also revealed that a week after losing her job, her husband Matt was also unemployed due to the global pandemic.

The following day, Skylar received $3,000 along with a personal message from Taylor.

Taylor Swift wrote, “I’m so so sorry. You and your family are just trying your best. I hope this gift of $3,000 helps you right now. Sending you a huge hug, Taylor.” 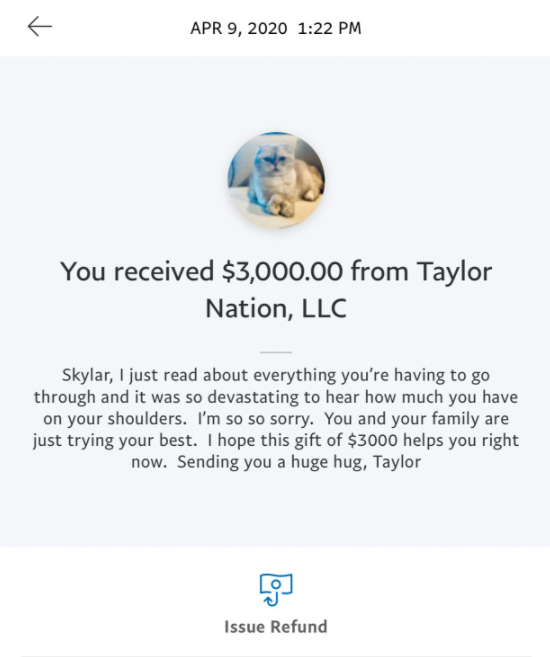 Horse Race in Lahore Postponed Due to Coronavirus

Tennis Doubles to Resume in England this Month

Horse Race in Lahore Postponed Due to Coronavirus

Tennis Doubles to Resume in England this Month

No New Tax will be Introduced in Upcoming Budget 2020-21: Hafeez Sheikh

Prices of Wheat Flour in Peshawar Register Increase of Rs. 200 per 20kg