At the time of writing, a plethora of headlines regarding the escalation of conflicts between Iran and USA can be witnessed on multiple news channels. More than 3000 US soldiers have been deployed in the Middle East region, because of the USA stating that Iran has been acting ‘hostile.’

According to US claims that Iran has been responsible for carrying out attacks on their oil tankers, and has been stocking up on Uranium which is against a 2015 deal. Iran is one of the most powerful countries in the oil rich Persian Gulf, and as the regular scenario for US goes, where there is a chance of getting oil, the country US will do anything to ‘secure’ the oil reserves, whether it means creating an  enemy or a friend.

America- the Policeman of the World

What is Soleimani’s Significance?

Qasem Soleimani, a top general and one of the most powerful men in Iran, was killed in a drone strike at Baghdad airport on January 3, 2020. Shortly after Soleimani’s funeral, The military adviser to Iran’s Supreme Leader told media that Iran’s response will certainly be a military response. 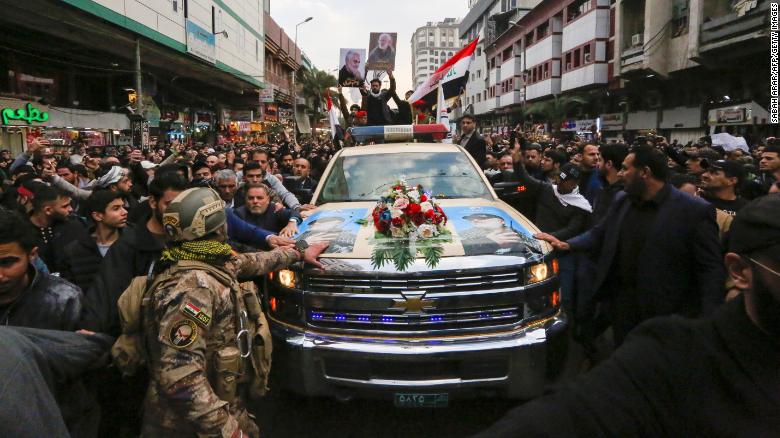 Mourners throng the car carrying the body of Iranian commander Qasem Soleimani during a funeral procession for Soleimani and Iraqi paramilitary leader Abu Mahdi al-Muhandis in Baghdad on January 4.

Soleimani was responsible for doing more for Iran that any ruled ever did, and thus Iran has not taken it lightly. Soleimani commanded the Quds Force (which translates as the Jerusalem Force), an elite Special Forces outfit in the region, and one of the best in the world. Consisting of spies, soldiers and technical experts, they are considered a hybrid of multiple Western Special Forces like the Green Berets, SAS commandos and Delta Force.

Rather than stop a war, Trump just called Tehran’s bluff and waged an all out war. No American president has been this bold and provocative in their conflict with Iran. Amid a move that could set the whole Middle East aflame, the slight chances of a World War 3 can be seen brewing up.

With that said a question arises, how will the resources and military of the two countries compare today. Who would emerge victorious, if there was a war, based on the facts and figures?

Who are the major US allies?

While America has increased their spending substantially, Iran in 2018 slashed their defense budget to an equivalent of $43 billion. Iran has been using old military equipment, while the US spends 5 times more on military and is so far the most advanced military in the world.

Iran is mostly using American equipment, which hasn’t been updated, while the US military never stopped upgrading. That puts them at a disadvantage, with the US leading in terms of equipment and resources.

Who are Iran’s allies?

Throughout his career, General Soleimani enjoyed devoted loyalty from tens of thousands of fighters across Iraq, Syria, Lebanon, Yemen and the Gaza Strip. The allies include Iraqi militias, Hezbollah group, Gaza militants and Yeneb’s Houthis. Furthermore, in the case of a conflict Russia and US enemies like North Korea are expected to back Iran further complicating the results.

Iran has a huge number of land fighting vehicles, with their complete focus on land based conflicts and they have a significant Quds Force with 15-30 thousand active agents. To further add to it, Iran is hard country, geographically to invade via land. A land altercation would most definitely, stretch over decades with no definite end.

Let’s just hope, the countries find a way to work out their differences as a war will only unleash further suffering for humans all across the globe. There’s already enough of to go around already.